"...Epidemic of reproductive abnormalities has likely been caused by...the residues of munitions used by American armed forces on the city in 2004." 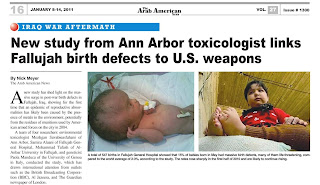 A new study has shed light on the massive surge in post-war birth defects in Fallujah, Iraq, showing for the first time that an epidemic of reproductive abnormalities has likely been caused by the presence of metals in the environment, potentially from the residues of munitions used by American armed forces on the city in 2004.

A team of four researchers: environmental toxicologist Mozhgan Savabieasfahani of Ann Arbor, Samira Alaani of Fallujah General Hospital, Mohammad Tafash of Al-Anbar University in Fallujah, and geneticist Paola Manduca of the University of Genoa in Italy, conducted the study, which has drawn international attention from outlets such as the British Broadcasting Corporation (BBC), Al Jazeera, and The Guardian newspaper of London.

The results were recently published in the peer-reviewed International Journal of Environmental Research and Public Health and show a major rise in chronic, devastating birth defects of the neural, cardiac, and skeletal variety at a rate about 11 times higher than originally estimated.

A total of 547 births in Fallujah General Hospital showed that 15% of babies born in May had massive birth defects, compared to the world average of 2-3%, according to the study, and the rates rose sharply in the first half of 2010.

The study, which surveyed a total of 55 families with seriously deformed newborn babies in May through August through a questionnaire to delve deeper into the causes, shows that metals are potential sources of contamination causing the defects, especially in pregnant mothers within the city, and concludes that they "could be due to environmental contaminants which are known components of modern weaponry."

Washington has officially denied the claims of the study, however....

* The Guardian article on the Fallujah birth defects epidemic: http://www.guardian.co.uk/world/2010/dec/30/faulluja-birth-defects-iraq

* The Daily Telegraph article announcing the publication of the Fallujah study: http://www.telegraph.co.uk/news/worldnews/middleeast/iraq/8234159/War-contamination-could-be-causing-deformities-in-Iraq.html


Since December 30, 2010, there have been dozens of mass media articles on that Fallujah study.

Posted by For Fallujah's Children at 8:51 AM